If you’ve been following the Apple news today, you’ve learned that the iPhone 6 and iPhone 6 PLUS have been announced along with the iWatch. We’ve been talking non stop around the office today about the pros and cons of the new iPhones- a lot of people don’t want a bigger screen which is now going to be mandatory if you want a new iPhone 6!

Well a piece of news just came across the press airwaves today and we’re going to say “goodbye” to the iPod Classic. This is a moment in history which officially does away with mass storage via hard drive in the iPod. 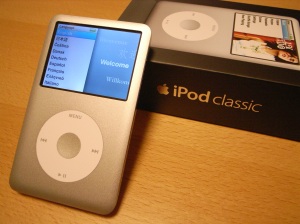 iPhones have always been flash-based storage, as well as iPod Touch devices. But Apple has been holding on to the behemoth storage capabilities of the iPod Classic. If you wanted to carry around a lot of music with you, this is the device to do it with!

The very first iPod that was released back in October of 2001 which launched a series of MP3 players that all had “spinning” hard drive technology…and it was fantastic. As the years progressed, the drives got thinner…the iPods got smaller…and the technology made the drives faster and hold more data-

Until flash storage came along and has now outdated the “old” hard-drive style of iPod.

It’s time to say goodbye to an old friend; the iPod Classic as it is finally being discontinued by Apple, Inc. For better or worse, it’s time to move on. Rest in peace old friend, times are changing.

Mission Repair will still support iPod Classic repairs and services for years to come, so never fear – there’s a repair shop that understand the value of these “classic” beauties.