Have you recently had the unfortunate experience of cracking the glass on your iPad? I completely feel your pain x 3! If you read this blog on a regular basis, you should be privy to the fact that my son has cracked the glass on our family iPad 2, three times over. Ok, so one of those occasions may have been my wife, but I still can’t get an accurate story!

You understand that the thing needs to be repaired. Not only for the sake of using it, but for safety reasons as well. The glass on iPads are sharp and are not fused to the LCD like smartphones and other tablets, making it much easier for the glass to fall out and injure. However, you are also willing to wait on a good deal to come around!

I totally get it and am of the same school of thought!

It took me a good while to finally get going and fix our iPad and I’m surrounded by technicians on a daily basis that could fix me up in a matter of minutes. Just put some clear tape over it until Mission Repair runs another special. Why pay full price if you can wait a day and possibly get a discount? But sometimes that day turns into weeks and months or years!

How about we put an and to the waiting and get started on your repair today? To help this process along, I am going to offer a special blog reader only discount! If you email coupons@missionrepair.com, we will send you a 15% coupon code that you can use towards getting that iPad repaired! What better time to finally have your beloved iPad repaired than now?

This coupon is good for every model of iPad repair and for any service actually! So if you don’t have a broken price of glass, but do have an LCD issue, this coupon is for you as well! This coupon code will expire on 1/31/14 and can only be used once per order. So act fast and email us!

We are having some interesting weather in Kansas City during the month of January. We finally had our first snow of the winter, the have experienced well below zero temperatures (which is not at all uncommon) and today, it is sunny with the high of 69-72 degrees.

Now, I have lived in this area for most of my life and this has got me scratching my head. Kansas and Missouri are known for their extreme temperatures in either direction, but this is just crazy. I guess we will enjoy it while we can… I hear there is also snow in the forecast for this week!

I could get used to this!

We are going to have a pretty eventful week here at Mission Repair. With some new service additions and programs that we have taken on, It is going to be Superbowl Sunday before we know it. Time truly flies when you are up to your eye balls in projects to work on. Don’t worry, we won’t let these deter us from coming back here on a daily basis to talk to our favorite people, The M:R Nation!

So watch out this week for specials, discounts and new services pertaining to everything Apple, Samsung, Amazon , HTC and much more.

I think there might be some confusion among folks over the differences are between the different iPad models. So allow me to shed some light on some of the subtle and not so subtle differences.

Form the outside, you are not going to be able to notice much, if any differences at first glance. All 3 devices are 9.50″ x 7.31″ x 0.37″, all have a 9.7″ display and all sport a facetime and rear camera, but a great way to tell the difference between an iPad 2 and the others is the Siri function. All newer generation iOS devices have Siri.

Those are just some industry tips that we use here daily to identify what you are sending to us. While most folks get it right, we do have the occasional customer that orders the wrong service. Hopefully this can serve as a guide for those of you that are not quite sure. Moving forward, lets talk about the inside of these great devices.

This is where it can get complicated, so I won’t go too in depth. The iPad 2 had a lot less in common with it’s two successors when it comes to the internals. Take the glass/digitizer for an example. The iPad 2 has a completely different connector than the The New iPad and the iPad With Retina Display which share the same cable (Shown in the picture below).

In fact, the LCD is the same on the two successors as well. Now, we don’t usually disclose this type of information, but I want to make one thing clear, The New iPad and the iPad with Retina display use the SAME screen. So PLEASE, don’t fall for the marketing tricks of other companies and pay more for the iPad with Retina display, It is exactly the same and it should cost the same as The New iPad repair!

For further internal information, check out this comparison chart. It really shows some key differences and similarities between the 3 models. 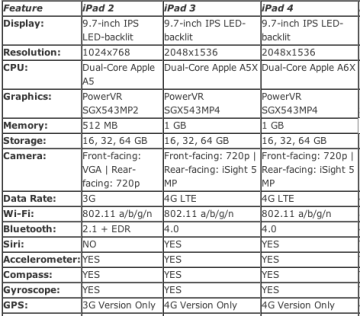 As you can see, looks can be deceiving. While these 3 models look identical, they are for the most part different and different for the better. This is what Apple is known for. Taking something great and slightly improving it for the better.

Lastly, I want to shed some light on the biggest thing these 3 iPads have fiercely in common. Mission:Repair services all of them! We do the leg work on finding the differences and sourcing those different parts so you don’t have to deal with it:-)!

From screens to headphone jacks and everything in between, we are you one stop shop for iPad repair. I hope this post has helped you to identify what iPad you own. Even if it is not broken, it’s still good to just know. If it is broken, I hope find some of the links below helpful. Just click and enjoy!