With all the talk of Amazon’s new services lately – I just had to revisit some of our repairs that we offer and let you know that we have launched a few new services today.

There is some confusion between the Kindle HD and the Kindle HDX. These are 2 totally different devices and we should talk about them! It’s not just one thing; there’s a lot going on here: 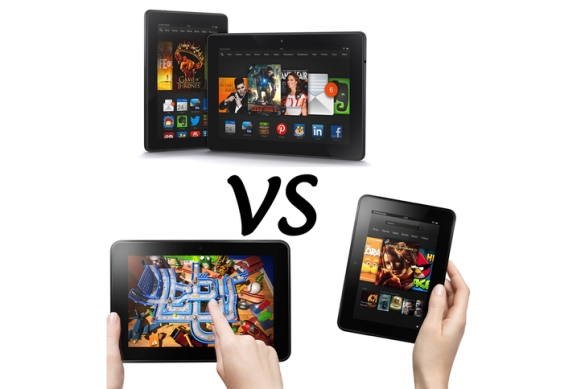 The Kindle Fire HDX models have a 2.2GHz quad-core Snapdragon 800 processor, the same sort of thing as you’ll find in the LG G2 or Samsung Galaxy Note 3. That means oodles of power on offer on both the 7-inch and 8.9-inch models, both with 2GB of RAM.

The Kindle Fire HD models both at 7 and 8.9-inches settle for a 1.5GHz dual-core processor. The HDX will be faster, but Amazon also reports that the Kindle Fire HDX will offer slightly longer battery life. Not bad considering the step-up in display and power. It’s aided by a new software feature designed for reading, which shuts down non-essential hardware to extend the battery to 17 hours if reading alone.

The camera isn’t the most important part of a tablet in our opinion, but you still see a large number of people using them to take photos: the Kindle Fire range hasn’t had a rear camera until now. The Kindle Fire HDX 8.9 has a rear 8-megapixel camera, as well as a front-facing camera.

Kindle is known for being well connected and the wide range of clever features, like Whispersync, that come with it. The new 7-inch Kindle Fire HD (2013) is the only model without the option for 4G. It also misses out on the dual-antenna Wi-Fi that the others offer. If connectivity is key, so you might want to avoid the 7-inch Kindle Fire HD and pick one of the others.

Fire OS3 brings a range of features to the Kindle Fire HD and HDX family, including a new Mayday button for instant customer service support, second screen features, better touch response, X-Ray for music, a new reading mode that powers down hardware that’s not needed to extend the battery life and much more.

This is where Mission Repair steps in. While the HDX is a little more expensive to repair than the Kindle Fire HD, it’s still simply more cost effective to repair than replace. Give us a call if you have any questions at 866-638-8402. Thanks!

I know, who reads any more, right? Well apparently reading is still a good way to spend quality time in life, and I happen to agree. In fact, Dandra is a librarian, so reading is not an option at the Arter house 😉

Today, Amazon officially released “Kindle Unlimited” which allows the customer to enjoy unlimited access to over 600,000 titles and thousands of audiobooks on any device for just $9.99 a month. There’s a 30-day free trial as well which is really nice! Don’t worry Dandra, I already signed us up.

Amazon is giving you the freedom to explore through reading with their new program. 600,000 titles. Tons of options. I’m in – I thought that I’d pass this along.

Have a good day, Ryan

Hello everyone, we’ve got a lot happening here at Mission Repair – and we are happy to announce the launch of our newest service for the Kindle Fire HD.

We’ve got a supply of brand new ports inbound to our location, and if you’re one of the many customers that have an issue with the port on your Kindle Fire, then this service could be just what you are looking for!

We’ve repaired literally thousands of Kindle Fire (Non-HD version) units in the last year – and it continues to be a prominent service for us here at Mission Repair. And like the Kindle Fire, we will receive your failing device, disassemble it, remove the broken charging port and install a new one. This will get your expensive device back up and operational again.

If you need this repair for your Kindle Fire, click here.

If you need this repair for your Kindle Fire HD, click here.

Any questions? Let’s get your device back to normal for you.

Its a nice foggy morning here in Kansas City and it’s tad bit on the chilly side. I have been dreaming of a nice 70 degree sunny day, but I just don’t think it’s going to happen. So what better way to get things heated up than a price drop? This is not just any price drop either. We are talking about a significant price drop on the Kindle Fire HD! Available in two sizes, 7″ and 8.9″, both have beautiful displays and both are becoming very popular in the tablet world.

With this massive price drop, we plan on seeing a lot more Kindle Fire HD repairs come through our facility, so we have taken the necessary measures to handle this nice increase. We are stocked and ready to go people! Also, please know that this repair involves us replacing both the glass and LCD screen? So if you find yourself with both a broken LCD and glass, this service has you covered!

As always, we would love to talk with you, so if you have any questions on this or any other service, please don’t hesitate to call 866-638-8402 or email sales@missionrepair.com. Wish me luck as I head down to our inventory room to unpack some freshly received Kindle Fire HD screens!

The Amazon Kindle has been a wild card of sorts in the tablet market. Originally released as an ebook reader, it has quickly evolved into a full out tablet. See the Kindle fire for example. This evolution has hit its next benchmark with the newest LAB126 designed Kindle Fire HD 8.9″. Who is LAB126? They are the the company that actually designs the Kindle for Amazon (I thought I would throw that fun little fact in there for ya).

Starting this very, cold and snowy day, we are now offering the Kindle Fire HD 8.9″ Glass & LCD Screen Repair Service and Amazon Kindle Fire HD Diagnosis Repair Service! The screen service actually includes both the glass and lcd screen. So if you find yourself with with both screens broken, you are in luck! There will be no extra charge for that. If you only have one or the other broken, you still have to have both screens unfortunately. You can thank the aforementioned Lab126 for that, they designed to be that way 🙂

This is a great fit for Mission Repair and we are very happy to be offering this service. It rounds out the already extensive Amazon repair service capabilities we have. So if you find yourself in need of a Kindle fire HD 8.9″ repair or one of the many others Mission Repair offers, shoot us an email at sales@missionrepair.com and we would be happy to help you out!