If you have been following the news releases or the Mission Repair blog, there has been plenty of reviews and opinions about the new 4″ iPhone 5SE. The best news is the LCD screen, should the worst happen, is the same part as the iPhone 5S. Although the cables are slightly different, this should keep repair part costs within reason for this new iPhone! I’ll keep you updated as the parts become available. If you purchased the iPhone 5SE I’d love to hear what you think about it.  Leave a comment below.

Have a great day!

I saw this yesterday on the Wall Street Journal and thought that it was quite interesting.  In case you haven’t seen it:

The zombie apocalypse will void Amazon’s terms of service!

Amazon has just released a new set of tools for game developers in a package called Lumberyard. In its updated terms of service, Amazon said the game makers shouldn’t use the Lumberyard development tools for “life-critical or safety-critical systems” — except in the event of the zombie apocalypse.

The terms of service say the Lumberyard software code isn’t intended for developers to use in code for medical equipment, driverless cars, airplanes, air traffic control or nuclear facilities.

Then, tongue in cheek, Amazon noted that Lumberyard materials shouldn’t be used for manned spacecraft or for military use in connection with live combat.

But if all hell should break loose (literally), Amazon said developers should ignore all those restrictions.

“This restriction will not apply in the event of the occurrence (certified by the United States Centers for Disease Control or successor body) of a widespread viral infection transmitted via bites or contact with bodily fluids that causes human corpses to reanimate and seek to consume living human flesh, blood, brain or nerve tissue and is likely to result in the fall of organized civilization,” Amazon (AMZN, Tech30) said in its terms of service.

Apparently, it’s not uncommon for companies to bury jokes in their typically long and boring terms of service.

It’s prompting me to have some fun with my website polices.  Maybe I’ll embed a coupon code in there somewhere for anyone that gets to the bottom of it…we’ll see!!

Until then, stay safe and don’t forget that the number one rule is “cardio” in the event of a zombie attack. 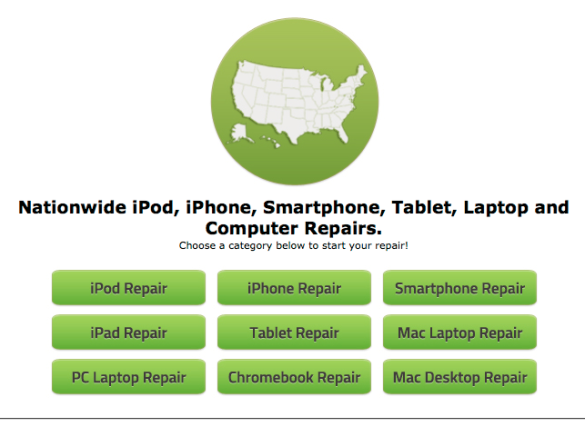 It’s no secret. We’ve been in business for years since 2008 and we have the best reputation, most ambition, best prices and highest level of customer service. Mission Repair is the leading Apple Service Center in the United States. Don’t take our word for it, we receive praise, awards and accolades from the top publications in the industry.  You’ve read about us in the news or heard about us from a friend. Now you just need to try our services but found that we are in Kansas City. Let’s talk this one out!

First of all, we are in Kansas City to reach the entire USA with ease. Trust us, it’s costs a lot less to move an item from Kansas City to New York vs. from Los Angeles to New York. We’re here to save you money with the best possible negotiated FedEx Rates in the industry! Additionally, we have developed and are proud to provide the easiest and most efficient way to move your item to and from our service center; instant email labels for iPods, iPhones, Cell Phones, Mac Laptops, Amazon Kindles and iPads offer the best protection, fastest turnaround, and least expensive way to pack, ship and insure your device for transportation into us!  Read over our shipping instructions if you have any questions, or give us a call at 844-459-0105.

It’s the night before our BIG Cyber Monday Sale and we’re releasing our “never-been-so-low” specials to you, our Blog Readers, before the big event. Even though Cyber Monday is tomorrow we’re giving you a sneak peek!

We are geared up for our busiest day of the year and it never disappoints. So stop by one of our walk-in locations or place your order online while this Cyber Monday Sale lasts! Now is the time to get that cracked screen repaired or non-functioning battery replaced. We have over 50 products on sale at 20% off with coupon code ‘BUYNOW’. This sale only lasts Monday, November 30th, 2015.

Click here to see a list of specials that are 20% off on Cyber Monday (Coupon Code Required). . .happy shopping!

If you have any questions regarding a repair service, contact us during our normal business hours at 1-844-459-0105 or email sales@missionrepair.com. See you tomorrow!

Do you have a cracked screen on your iPad 2? Is your Google Nexus 7 having problems charging? Mission:Repair is here to help and we can do so today – before the Christmas festivities begin. Santa is ready to deliver gifts but there is something Santa can’t deliver – iPod, Smartphone, Tablet and Laptop repairs!

We are geared up for the Holiday Season at Mission:Repair and it is our busiest time of year. We are ready to get your device repaired in time for Christmas but in order to do so, you must stop by today! If you visit one of our walk-in locations be sure to ask us about our SAME DAY service options. We can repair your tablet in about an hour and a half and get it back to you with a brand new screen.

We will be open tomorrow, Christmas Eve, but only until 1:00pm. So don’t hesitate, visit us today so we can have it repaired for you in time for Christmas. Give us a call at 1-866-638-8402 or visit www.missionrepair.com to place your order!