Water and electronics don’t mix – I’ve talked about it before but I want to discuss a few points again. Is your MacBook waterproof? Not a chance.

It’s more common than you might think; but we receive items in for repair on a daily basis that show signs of liquid damage and without doubt if you get your iPhone wet, you’re bound to see problems unless it is addressed.

My guess is that some of these customers don’t even know that they had a liquid spill or had any contact with water/soda/coffee whatsoever. Sometimes is the unknowing fault of a child or household pet that inadvertently spills or “leaks” onto a keyboard.

For example, here’s a logic board that came out of a 2014 MacBook Pro with Retina Screen; and the device was not displaying video. 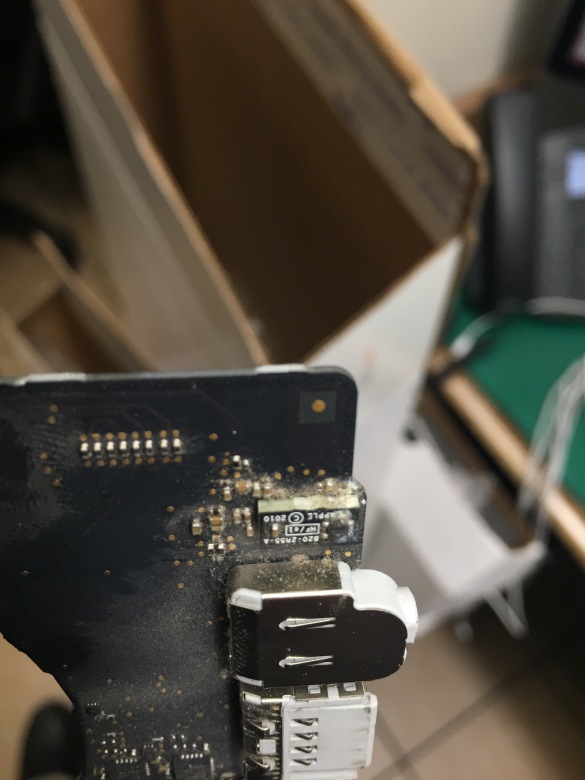 If you look closely, and I know that it’s hard to tell; but can you see that chip that is on the logic board that says “Apple 2010”? (It’s actually upside down) It’s about dead center in the picture…there is an IC that is on top of it with slightly green corrosion that is growing from some sort of liquid that got onto the board.

I know, the picture doesn’t do it much justice, and I even almost missed it. For scale, that component just below it is the headphone jack port, which is very small in itself…this was a minute amount of corrosion on the MacBook Pro Logic Board that was causing a major amount of problems!

So I cleaned it up and guess what? Video displayed back on the screen again. This would have been a $680 repair had this customer went directly to Apple…but it was just took me one hour of labor to complete it. The customer makes out and Mission Repair saves the day.

We offer a full-line of liquid damage repairs; but to be realistic, not all of these are repairable. If your MacBook was sitting at the bottom of the lake for week, it’s probably not repairable. But if you spill a cup of coffee on the keyboard of your computer; turn it off quickly and give us a call. We will do our best to save your day too!

I made a surprise visit to my Mission location yesterday..unannounced…and found my guys watching cartoons!  Yeah, you may know it.  It was “He-Man” from the 1980’s!

Just as I was getting close to letting my team hear an earful, I calmly asked “why is He-Man running on this customer’s MacBook?”  I’m a fair guy.  I don’t mind the employees listening to music while they work, or even tune the radio to AM to listen to a Royals games now and again.  But watching cartoons while you’re on the clock?  It ain’t happening.  I was looking for the ring leader. 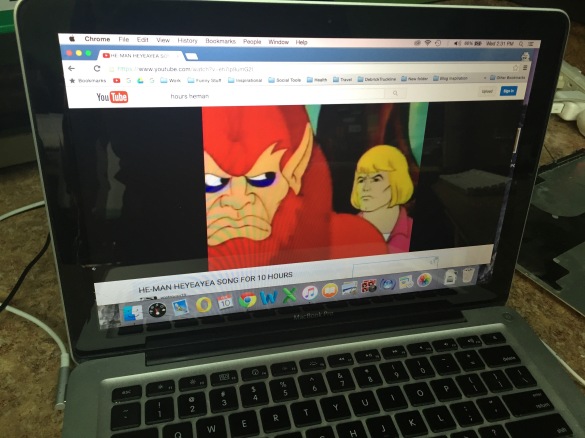 “Ryan, this customer was having issues with Youtube shutting down randomly, and I’ve pinpointed it to the RAM in this unit.  I diagnosed it, tried it myself after I was able to duplicate the issue, and now it appears to be solved.  I’m now running the first long video that I could find, and He-Man was it.”  He goes on to say “It’s been running for a long time, but this is a 10-hour marathon and I wanted to make sure that our customer didn’t have the same issue after I repaired the computer.”

Well then.  I grabbed a large piece of humble pie and took a bite.  Those guys weren’t messing around.  They were testing a repair.  GREAT!

That means apparently I do condone cartoons while we’re on the clock.  As long as you tell me it’s for “testing” purposes, that’s all I need to hear!

Bonus points…what was He-Man’s tag line?  “I HAVE THE POWER!”  I can personally remember that opening sequence of the cartoon, apparently it’s a keeper in my mental files.

So rest knowing that if you bring your MacBook Pro in for repair: we may watch some cartoons on it.  But it’s for a good cause, and this customer was thrilled that we did.  It’s a highly technical operation, but someone has to do it 😉

Every day we receive Macs and PC’s in for repair; and some times there are subtle issues that are bigger than one might think!

Recently I had a very nice customer that was simply trying to install a new solid state storage drive into his 17″ MacBook Pro; but the computer wasn’t wanting to install any new software.

He brought the unit into us, and at first I was sure that he just had a bad drive cable. So I tried a new cable but had the same issue. I tried another new hard drive with the same result. I tried the RAM, isolating everything that I could but drilled it down to a logic board (mother board) issue. Once I pulled the logic board from the unit, it was easy to see a burnt IC and resistor (center of the pic!): 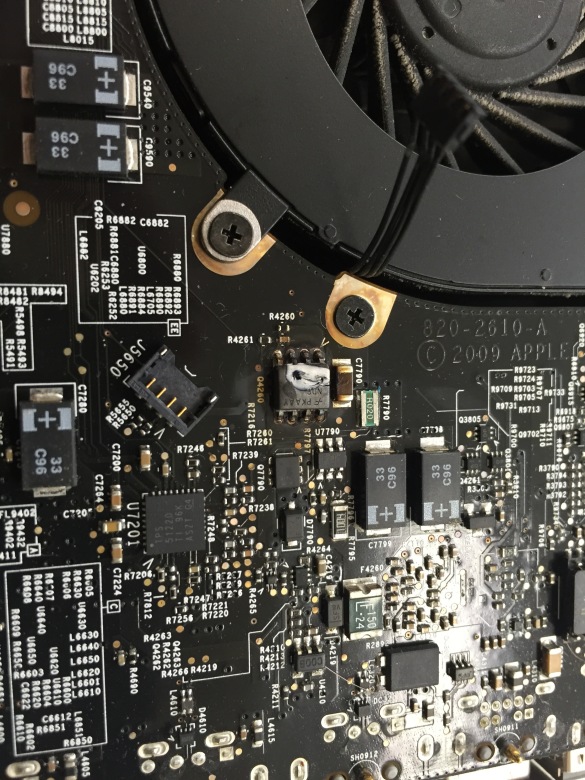 The tricky part about this computer is that pretty much seems like it’s OK until you try to install software. Wow…there is just something wrong with the “logic” in this logic board!

So a little bit of surface mount rework and we will have this unit back and running perfectly for the customer.

I just want to let you know that a failing logic board can show it’s ugly head in a lot of ways. It can have no power, distorted video, not reading the memory or hard drives correctly and a myriad of other possible issues. Just keep these things in mind if you’re having computer problems, and that Mission Repair can solve them.

Have a good Wednesday! Ryan

I was going through the insights of my blog tonight as I have been patiently waiting for the 1,000,000 Unique Visitor counter to turn (we need about 200 more at this point), and found that our best blog day was:

Yes, we had over 31,000 views on a day a few years ago (we average much lower than this per day now) and it was a special day. We had received a frame for an iPad 2…long before the iPad 2 was released…and we posted it here on our blog. Here’s the infamous picture:

And a link to the original article here. We talked about the frame itself, how a MacBook camera fit directly into the slot where a camera would most likely be, and posted it for the world to see. Looking at the picture now makes me thing “that got all of that attention?!?” Well it did bring 31,000 views on that memorial day and crashed our wordpress site a few times so it probably would have been even more!

There’s a little known tidbit that I’ve never talked about regarding this picture. Apple called me directly about it and discussed how and why I got the part and asked if I would take the image down. We had a peaceful discussion about it, it never went any further, and the picture and article remain here posted on the Mission Repair blog today.

I’m bringing this up because since that post a while ago, we have had a steady increase in blog readers, subscriptions, followers and re-posts. Sometime in the next few hours we will reach 1,000,000 Unique Visitors, and I’m going to stay awake for that. You don’t need to; unless you’re trying to win that iPad Air that I’ve been talking about. Then you should grab a cup of coffee and keep watching. It’s going to happen very soon to make today another Mission Repair Blog moment in history.

Hello everyone, it appears that we are in for some real fun this week as the the NFL season starts tomorrow!  I can’t believe that another week is in the books and we’re heading into a great game with the Steelers and the Patriots tomorrow evening.

I know, it still seems early to me, but the NFL preseason games are over! This is an awesome time of the year for us because we have a good group of football fans at Mission Repair, and I usually sneak out with a few employees for some tailgating here in Kansas City, Denver, and we’ve even travelled to California to see a game or two.

Dandra sees these weekends as “the days that we get to eat cheese dip”, but I like to think that I’m more of a true football fan than her. Don’t get me wrong, I love cheese dip…as long as it comes with some professional hits, runs, tackles and touchdowns.  And some chips 😉

To all of those that are in fantasy leagues: Best of luck. I needed to stop playing fantasy football for two reasons:

1. I was distracted by the fantasy play. It took me away from the games that I really wanted to watch and I was focusing on the wrong parts of what was really important to me.
2. I never won 😉

So I’m back in “couch potato” mode on Sundays for a while…unless of course I need to be at the office to help repair the stacks of laptops we have in the repair queue. I better assist tomorrow through Saturday…I need this Sunday off!