Ruin is a strong word, I should say “ruin your day”, because in all of these cases, the iPhone can be fixed! It’s why we are in business.

I thought it was time for us to run some data through our system and come up with the top 5 ways our customers have reported damaging their iPhones. This data is similar for iPods and Android phones. Without much more to say, let’s see what and why things are happening to our customers in real life! We will start with #5:

Unfortunately we hear this a lot. “I set the phone down and the next time I picked it up, the screen was cracked”. Or, “I left my phone in the car overnight, and now it won’t turn on.” These types of issues are a mystery. Spontaneous breakages. I think it’s the aliens that did it.

Well, I can’t really say “ate it”, but truthfully there are many times that either the family dog thought the device was a chew toy, but we are also going to include dogs stepping on devices in this one. We hear this a lot: “my dog stepped on my iPad” and the next thing you know is that we’ve had to replace a cracked glass on the device.

3. Pulled by the cord while plugged in.

It’s never a good idea to plug your iPhone in then string the cord across the hallway so that your iPhone is sitting on a table. This is a recipe for disaster, and now that white cable that you treasure so preciously just became a tripwire for the next unsuspecting passerby. This issue causes a lot of cracked screens and charging port problems. 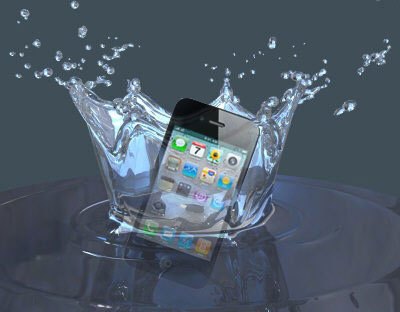 I just heard this on Friday: “I had my iPhone in my back pocket, started to pull down my pants to use the restroom…and ker-plunk my iPhone went into the toilet.” We love these (not really). Truthfully clean toilet water in the iPhone doesn’t scare me that much; but some of my technicians might think otherwise. Spilling a glass of water, jumping into a swimming pool with an iPhone in your pocket, or dropping your iPhone into a glass of beer at a Rolling Stones concert have all been reported.

There’s not much more to say about this one. Drops are clearly the number one reason that customers call into Mission Repair for service. Some customers even state “I dropped my iPhone from about 3 feet onto the carpet. I can’t believe that it cracked!”. Believe it.

And there you have it. Straight from the customer’s experience. Let me give you one more “abstract” testimonial from a long-time customer of ours that flies with the Blue Angels Navy Team. Lt. Amy Tomlinson took her trusty MacBook with her on a flight, and slammed the canopy of her F/A-18 Hornet crushing the screen. She called us at Mission Repair and we got her back in working order in no time. I’ve recently talked with Lt. Tomlinson and asked her about that MacBook. She was proud to say the she upgraded herself into a new unit; but the original “smashed then repaired” laptop was still being used by her mother after several years. That’s just awesome!

Have a great week, I’ll be back soon.