Today is a day in history that most of us won’t forget. We can never forget.

Last weekend, the Kansas City 9/11 Memorial Stair Climb was held downtown and the crew put on a fantastic event.  We were able to watch 343 firemen climb 110 stories to remember those firemen who made the ultimate sacrifice on 9/11.  Each firefighter carried the name and picture of an actual firefighter that lost his life 13 years ago.

Needless to say, it was a memorable and emotional event.

These firemen who volunteered to make the honorable stair climb and took the time out of their lives to get together from all over the country.  There are several of these events around the nation, but there were groups that came from as far as Georgia to participate.

Here’s some of the group getting ready as the coordinators staged them up in teams and sent them up the stairs in waves.  Each firefighter brought their full bunker gear and oxygen tank, totaling about 75 extra pounds to carry; Just like the firemen did when ascending into the burning twin towers: 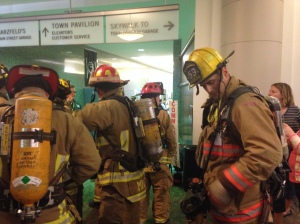 As the guys were climbing, there were camera sand screens set up that caught the action on several floors.  If one of them slowed down, they all slowed down.  It was brotherhood at it’s best.

When they were done…and descending down the lat flight of stairs…each fireman would announce the name of his assigned fallen comrade and ring the brass bell to signify the honor and remembrance of the individual.  This part hit hardest for me as I watched these guys sweating and pushing after almost two hours of climbing.

I won’t miss the event ever again.  I encourage anyone that has not been involved in one of these honorary stair climbs to research your city to find out if and when it is.  To me, being so far removed from the individuals that paid the ultimate price on 9/11/01, it draws me closer and allows me to reflect on the day, and to pay tribute to those that sacrificed and lost so much on that day.  I am grateful for what I’ve got.

As it turns out, Tom Hoegler, one of the event coordinators, will be performing his climb this Sunday. He has invited me to climb with him…all 110 floors…and we’re starting Sunday morning at 8:00am. I’m going to make it; I’ve accepted the challenge as an honor; and I’ll be thinking of all that have been affected 13 years ago to now.