Hello friends, I just watched a video on CNN.com that talked about the fad of owning and using a “vintage” cell phone. This was work related, so watching videos while at work is ok in this situation 😉

Apparently there is a new trend in cell phones – one that is making it “cool” to use an older, greyscale, non-smart phone as a sign and symbol of the times. I think that I might be one of the users that would quite possibly lean toward a “less-smart” smartphone – personally I’ve got so many means of communication with the outside world including through this blog I’m writing, that my cell phones seem to be on “offense” at all times. Yes, I have 2 phones, both set up and designed for very different purposes. Gulp.

In fact, I recently removed my email from my iPhone altogether and I’m a much happier man for it. I know, it’s strange…I just wait until I get to the office! 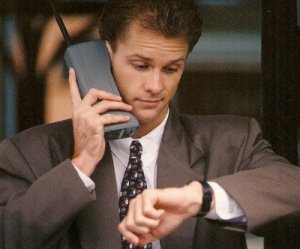 I find it a bit distracting when I’m out at a restaurant and see everyone swiping their phones; reading, texting, gaming or whatever. In my opinion it’s not a bad idea to take a break from the technology and look up once in a while.

UK manufacturer, Binatone, is making a new “Brick” phone. That’s right, it’s similar to the one that in the picture above, but it’s actually new and you can buy them now. Simple technology and a fashion statement to boot that come in several colors. There’s a caveat – you won’t get the smartphone experience. Not being able to Tweet or visit Facebook might freak you out for a minute but let’s face it, what did you do before Twitter and Facebook were around?

There’s a plus to older phones. Not only are they nostalgic but with the lack of a full-face glass screen they seemed indestructible. I can’t tell you how many times I dropped my old Blackberry on the ground and it NEVER failed. One drop of an iPhone and you’ll need to send it into us for glass repair. It’s how and why we are in business.

Are you willing to lose your smart features? Well that’s your call – no pun intended.