I have another new service to talk about before the day ends. This time around, its for the ZTE Warp N860. This is an awesome CONTRACT-LESS 4G smartphone with plenty of bells and whistles! It has a 4″ touch screen, 1.2 Ghz dual core processor (I remember when you couldn’t get a dual-core processor in a computer) and 512MB of RAM. This phone has all of the needed features to be considered a smartphone indeed.

This phone is relatively inexpensive, so we wanted out repair price to match that. So starting today, you can order the ZTE Warp N860 Front Glass Repair Service for only $89.00! This is half of what the phone brand new would cost and the best part is you don’t have to reset/reprogram/reanything! You will receive YOUR smartphone back!  Not some unknown refurbished replacement that will be cleared of any and all that you accumulated over the years.

So if you have a cracked screen on your  ZTE Warp N860, you know have a friend in Mission Repair! We can have that up and running in no time flat!

Hello everyone, this is an interesting confession.

I’ve been an iPhone fanatic for years. I’ve had them all. I live amongst them, in fact at Mission Repair my nickname is the “iPhone Whisperer”. OK, it’s really not my nickname, but you get the point. Swimming in iPhones has become second nature to me. That’s why this next piece is hard to talk about, in fact it was a bit troubling at first, but I’m ready to face the world.

I’ve added an Android phone to my life. 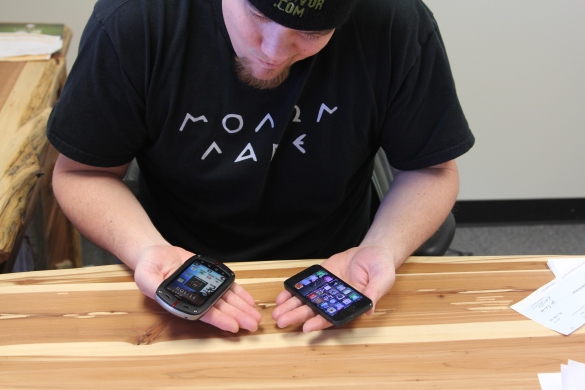 I bought and have been using the Casio GzOne Commando and I will admit that I really love it. I thought about the Samsung Galaxy SIII, but it was just a little too big. I have another business, Mission Survivor, and it really fits the theme – so I went in feet first and took the plunge. The problem is that I’ve already broken my iPhone 5 screen, and it’s just not the phone that I was expecting when I bought it.

The Casio GzOne Commando is a “ruggedized” phone. Rugged – with MIL-STD-810G certification – the Commando meets military standards for water, shock, and dust resistance making it perfect for any situation that life can throw at it, from the boardroom to the beach.

There’s still a catch with this phone- and we get them in every day for repair because the screen is glass and it can still break. It’s a lesser problem than the iPhone 5, as the price to repair the Commando screen is less than half of the iPhone 5. This is a HUGE benefit in my book.

I know, the iPhone 5 has some better features; and I agree. That’s why I’m carrying one of each. My iPhone won’t leave my side, but it won’t go on a hike into the wilderness with me either. That’s where my tough Commando comes into play. The iPhone 5 is like fine China, and the GzOne is like a plastic tumbler cup. They each have their place. Fine China at the dinner table with the inlaws? Perfect. Fine China at the football tailgate party? I don’t think so.

Instead of picking one over the other, I’ll keep both and use them as needed. Right now, that seems to be every day, so if you see me running around town using two phones try not to judge me. Stop and say “That Ryan guy is just smart, what a great idea.” At least it’ll make me feel better about it 😉

Ok, as smart as I think I am I’ll continue to develop a relationship with 2 phones. I’ll keep you posted.

Say hello to the LG myTouch E739! This handsome smartphone is the newest device that we service here at Mission Repair. I love this phone for one simple reason, It comes in my favorite color MATTE BLACK!

It is HSPA+ Capable, has a 1GHZ processor, sports a 3.8″ touch screen and runs Android 2.3. It has received a lot of favorable reviews and is a worthy device for the Mission Repair family!

Starting at this very moment, you can place your order for the LG myTouch E739 Front Glass Screen Repair online or give our newest Customer Service team member, Mathias, a call at 866-638-8402. He is by the phone ready to take your calls!